So, before the Creme Bruleed Chocolate Bundt Cake…a word about Marquise au Chocolate!

Baking has an interesting way of bringing out personality and character traits that you may or may not know about yourself.  This past week we were assigned the recipe, Marquise au Chocolat.  It sounded so good…very chocolatey…and so easy.  The problem I had with it, was it used raw eggs.  I am one of those people, rare as we are, that don’t use raw eggs.  I don’t eat cookie batter, I just don’t eat raw eggs.  When I tried to think really why I don’t, I think it really comes from having a mom who was in the medical profession and being the first born that I am, I follow what was ingrained into me at a young age.  I guess the fear of getting sick was worse than being daring.

Anyway, I sat out for the last recipe and then took a look at all the blog posts last week and was so disappointed to have missed this awesome, amazing dessert.  Apparently, there are a lot of people who aren’t worried about raw eggs haha!  There were those few though, who had my fears but cooked the yolks and had a great experience with the dessert…so thanks to those few bakers I took on the chocolate mousse…with cooked yolks…and it was as amazing as everyone posted!!  I added oreo cookie crumbs on the bottom which were good but didn’t quite stick as well as I had hoped…but tasted great.

The consensus on this one was it was terrific…definitely a keeper so I am glad I tried it!! 🙂

I made the Creme Bruleed Chocolate Bundt cake a week or so ago.  I was so excited to make this one..because it was chocolate: something I like and also because I would be able to try a new skill and torch the custard!!  I picked up my parents creme brûlée torch they happened to have…my dad made sure I had enough butane in it and I was ready.

The cake and custard were both easy enough to put together and the cake turned out light and chocolatey.  My problem was with the custard.  I stirred and stirred and it didn’t seem to want to thicken….at least not thicken as much as I had expected.  I was hopeful that once it sat in the fridge that would do the trick…but not so much.

I went ahead and tried to use it on the cake but it just seemed too runny to stay on top of the cake in order to torch it and get that true creme bruleed look.  This is the best I got…which was disappointing!

I mean, it was candied, but I had visions of a beautifully torched topping to this cake and it just didn’t happen.  What I did instead was give my tasters some custard to drizzle on their pieces when they got home.  The custard tasted fine, just wasn’t thick enough to stand on top. 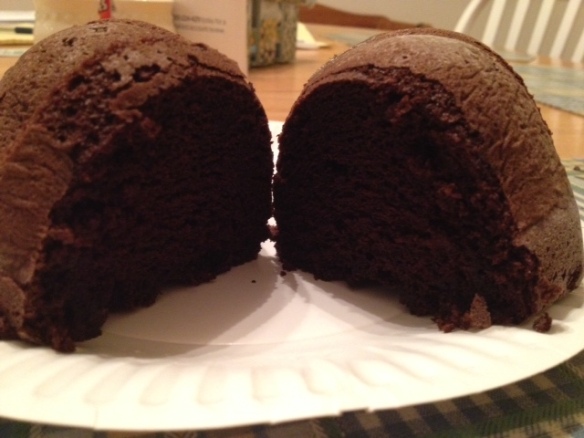 This was one of those recipes that was good…everyone enjoyed it but it just didn’t seem to be what I expected and probably not one I would try again.  There are too many really good recipes out there…but hey, once again fun to try!!