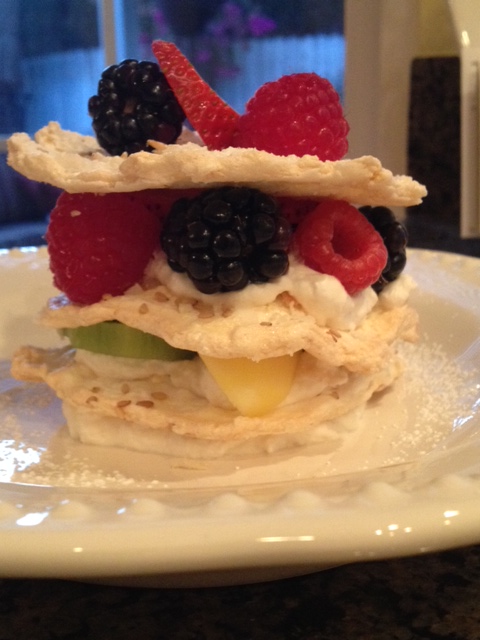 This recipe was a surprise!  We all thought it looked so gourmet but didn’t expect it to taste THAT amazing.  It is a pretty simple recipe…meringue wafers layered with whipped cream, berries, and tropical fruit, but something magical happens when it is all put together.  My husband kept saying he thought it was the best recipe we have made so far but couldn’t figure out why it tasted so good.  That was exactly everyone’s response who tried it.  They simple loved it!

This one looks hard, but actually is quite easy.  There are basically three steps, all which can be made ahead of time which I love.  Then you can construct the towers when you are ready for dessert.

The first step is making the meringue wafers. 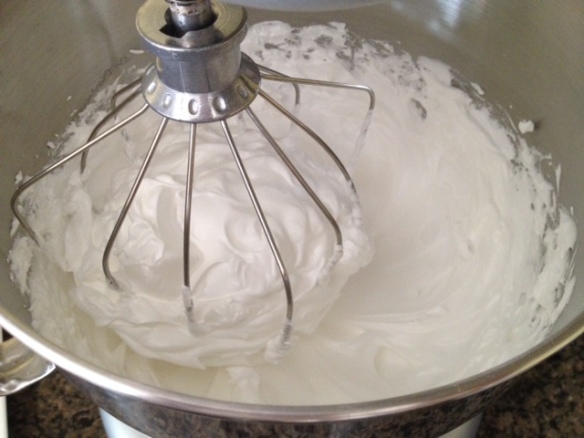 It was super easy to whip up the meringue and then add some coconut.  The recipe calls for making a plastic template.  I thought that sounded like it would make the whole process harder and messier.  I just eye-balled the round circles and made them all the same size…sprinkling them with the extra coconut and sesame seeds after I had a pan full.  I figured it didn’t matter if they were all a little different.  I used an off-set knife and had no problems.  I think my wafers might have been a little thicker than what is called for in the recipe but in the end I believe that is what everyone loved the most and it made it a little easier to remove them from the pan. 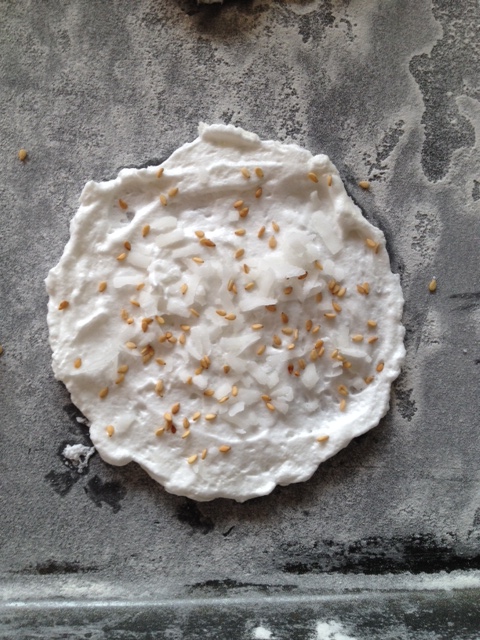 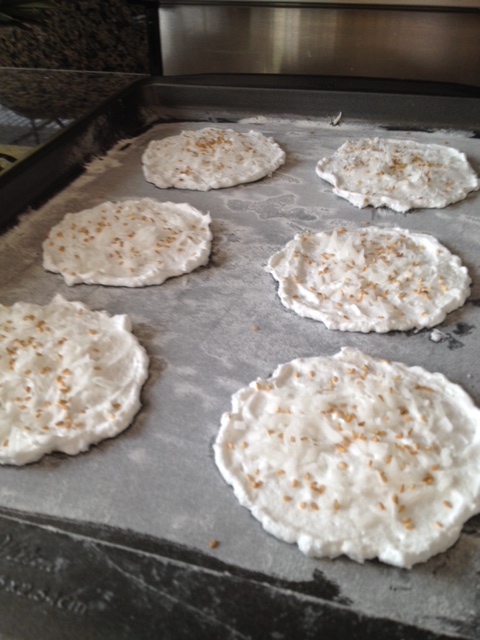 I think the hardest part was removing the wafers from the pan.  I made sure I liberally buttered and floured my pan and did exactly as the recipe stated…pushing the spatula against the pan.  I didn’t put the pan on the oven door but just left it on the rack.  It was a tricky process.  I just made sure to circle around the wafer, lifting it from all around and then with one swipe tried to grab it.  The good news is that the recipe is a bit rustic so if they aren’t perfect you can’t really tell. 🙂 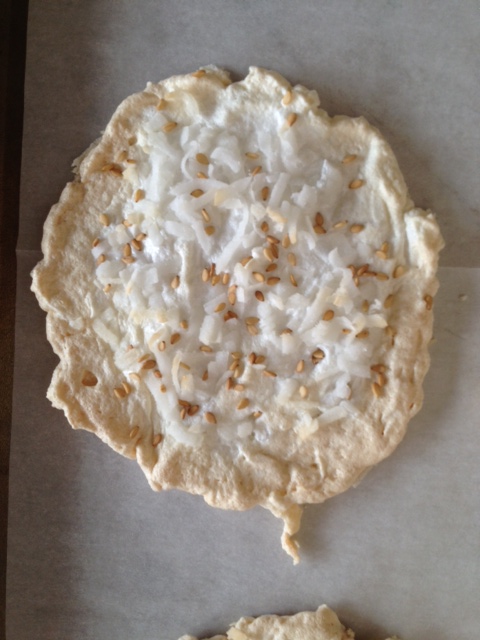 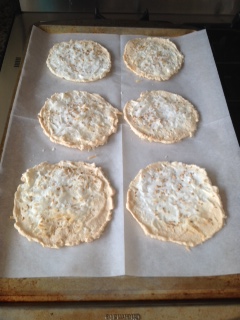 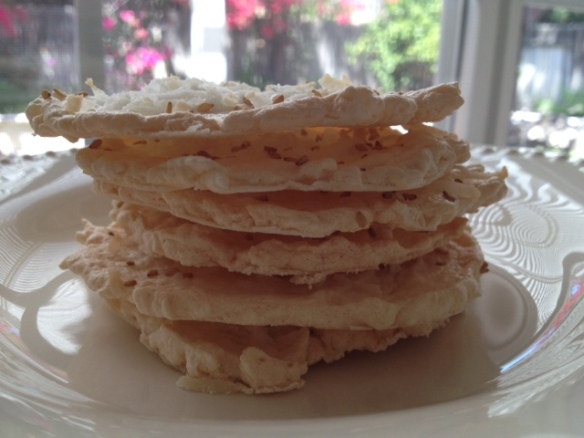 So while these are cooling onto step #2…whipping the cream

I did make a little change to the whipped cream and omitted the rum.  I didn’t have any so I just added more vanilla and some milk to make up the difference in the liquid.  I also doubled the amount of the whipped cream so we had plenty when I made the desserts up.

The last step is making the Napoleons

This was actually fun for me…kind of like doing an art project. 🙂  You have all the pieces and then put it together.  I used raspberries, blackberries, strawberries, kiwi, and mango in ours.  I think you can use anything you would like on this dessert.  Everyone thought it was beautiful and then didn’t quite know how to eat it.  Boy it becomes a mess really fast haha!  Everyone loved this so much, I made more of the meringue wafers the next day since I had so much fruit and whipped cream leftover.  They were such a hit. This recipe is definitely a keeper! 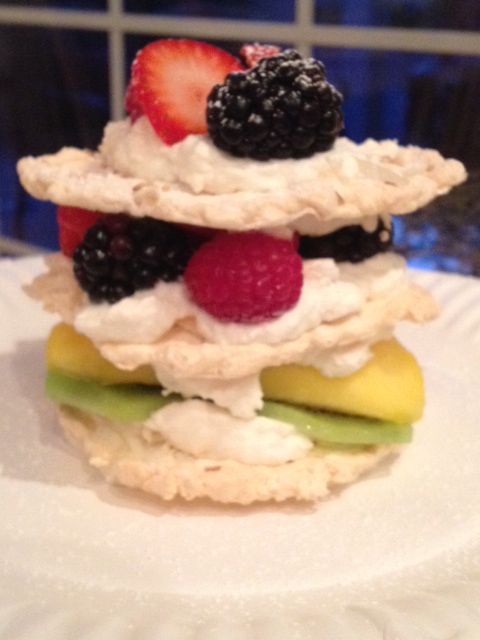 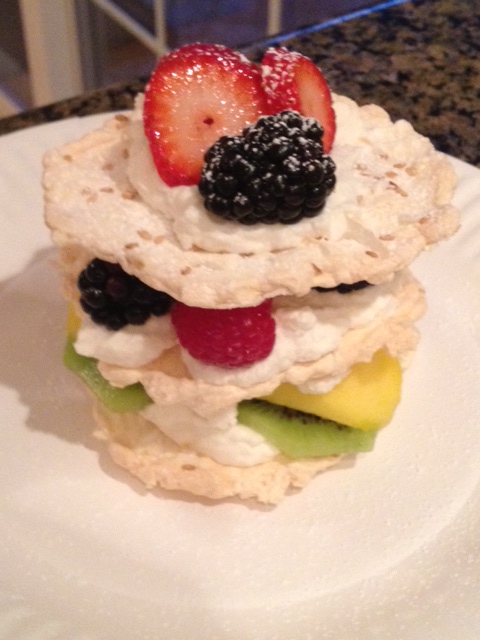 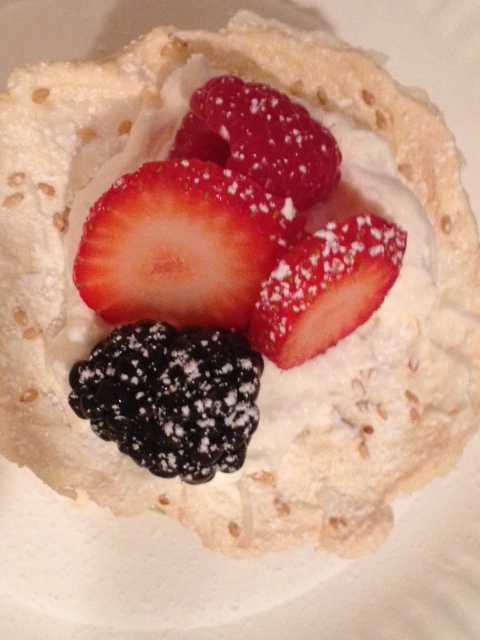